Which means that in just 4 months we’ve raised enough money through the Donate NOW! button on hOURLUNCH.org to buy any of the following items (at least in 2005 when someone compiled this list):

But instead of 4011 Wind-up Chomping Teeth we chose as a community to feed 30,000 Children… and that is just through our national donation page!  Looking at the ticker at hOURLUNCH.org our current TOTAL is 38,066 Meals!

How impactful is that?   Well it is startlingly close to double the capacity of the Moda Center (19,980):

For those interested, here is how I calculate $ to Meals:

Donations made through hOURLUNCH’s main remote donation page, is managed by our national partner, NoKidHungry.  For those donations I use their calculation of 100 meals for every $10.

Donations that come through our Oregon Food Bank link, or given to us Wednesdays at the table, is tallied using the Oregon Food Bank’s calculation of 30 meals for every $10.

Two disparate conversions makes the math a little more frustrating, and I’d love to watch our impact skyrocket by using the 1:10 ratio for every dollar we receive.  But national and local organizations don’t have equal resources and partnerships.  For example the Oregon Food Bank can say with confidence they can turn $10 into 30 Meals.  Whereas their national parent organization, Feeding America, shares the same $10 to 100 Meals conversion that NoKidHungry uses.

I also believe that sticking to the two different conversions ultimately honors the integrity of our message at the table:

So here is where we find ourselves on Week 21:

Why did I think that a guy sitting at a table alone needed a national partnership?  Or a full blown website?  Would folks outside of Portland even care about this weird Portland thing?  Well crazier things have happened…

… and we’ll get to all that next week!

Thanks for reading and for all your support!

Let me take you back to Week 2 when, based on the “success” (i.e. not getting run out of town) of that previous Wednesday, I returned to Director Park with a spring in my step!

Well it turns out that hOURLUNCH generated instant word-of-mouth within those few square blocks there in downtown Portland. Those square blocks happen to contain the KGW Studios and Fox Tower (the lighting rod for that early buzz); but also the management office for Director Park…

So when I stepped into the Park that second day I was met by both KGW’s Erica Heartquist AND a representative of the Parks Department. If it wasn’t for Erica, I don’t think we would have survived that second week (permits? what permits?). But incredibly, it has been the involvement and subsequent support of the Portland Parks Department that has given hOURLUNCH an OFFICIAL home in Director Park for at least the next year!

In that first interview with KGW I had trouble defining what this whole experiment was… because I truly had no idea. I was just out there to sit at my little table. It was also my first time on camera and I couldn’t get past the whole process of being a part of something that, for the first time, felt larger than me!  Check out those first baby steps into multimedia here.

This week, when Anne State and KOIN 6 stopped by the park to chat, I had the benefit of more time to think about what hOURLUNCH has become. What people see in a guy sitting at a table in the park. What may be beneath the surface that continues to peak peoples curiosity and garner their support.

From our interview, which aired on Thursday: “I think the important visual is the empty table because it allows people to look at hunger in a different way.” As basic as it sounds, I’m not sure a comment like that could have come out of me those first few weeks. I just didn’t have even that level of understanding about what spoke to me about this idea yet, let alone what interested others in it. Watch the full KOIN segment here.

Thanks to Anne’s segment, this week ended up a surprising social media success!  Not only did we raised an additional 850 MEALS through visitors to hOURLUNCH.org… but as I am writing this (at Coffee Time on 21st and Irving; before my Chicago Bears try to recover their season) our Facebook page boasts 827 Likes!

I am proud to say that is nearly 100 more followers than last week…. and 800 more than when that first KGW interview aired 18 weeks ago!

Let’s just collectively agree that Week 19 is as good a place as any to begin this Blog… then I won’t feel guilty about waiting this long for my first “weekly” entry!

In my defense hOURLUNCH has a lot of EXCITING things in the works in the near future that have required much of my focus.  I’ll give some hints here over the next few weeks, as I am able.  But for now let’s turn from the future to this past Wednesday… and the Arctic air that found us this week!

This was the first Wednesday at Director Park that my usual bright navy suit was not enough to keep me warm. Thankfully Oregon’s Columbia Sportswear carries tall sizes.  So I was able to at least keep the blood running in my torso!

Despite the cold, a dozen or so supporters and well-wishers stopped by the table to say hello and donate $34!  That may be less than the $100 we have been averaging… but $34 in ONE hour in 30 degree weather??  It still astounds me the web of support that can stem from one guy, one hour, one day a week.  And I have never been more thankful for every single dollar and every frozen hand that gave them to us!

This was also the week that we finally found a home for our Portlandia dvd that was autographed by both Carrie and Fred! Congratulations to JAYNA, who won our giveaway by donating $1+ at hOURLUNCH.org over the past three weeks. I was thrilled to have the opportunity to pay-it-forward after winning the dvd at the Oregon Food Bank’s annual Harvest Dinner fundraiser… along with the opportunity to visit the Portlandia set during their 6th season (sorry Jayna, I am too excited to part with that!).  I used Ornamental Kale in my vase this week as a nod to the great folks at Portlandia! 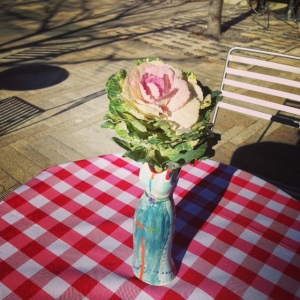 When I returned to my office after an hour in the Arctic air, I was met with some rightfully bewildered faces. However, our normally stoic and skeptical Assistant Sheila, just shook her head, reached into her purse and handed me our largest contribution of the day!  To her, braving the cold for an hour was enough in and of itself to warrant her support.  It made my day!

Which finally brings me to those majestic birds… the pigeon. Over the last month and a half, I have been accompanied each week in Director Park by a dwindling flock of strong willed pigeons.  They seem to have been doing quite well for themselves on odd crumbs and generous Portlanders (the same as me!) but one in particular caught my eye…

This poor little guy only had one foot and was having a challenging time hopping to keep up with the rest of his hungry cohorts.  I first saw him on Wednesday, September 24th and couldn’t shake the thought of how tough his winter was going to be.  My peculiar connection to him grew over the following few weeks as he showed up each day and shared hOURLUNCH with me.  That scrappy fellow has become something of a mascot for me sitting there at the table, rain or shine or cold…

Sadly, I haven’t seen him for the last few weeks. But if anything, he has made me thankful to be a human this winter and part of such a caring community.  Since, unfortunately, pigeons don’t have the benefit of incredible things like Food Banks.

Thank you for reading and see you next week!

…hOURLUNCH has a Blog! I am excited for this opportunity go a little deeper into what it has been like to be the ‘guy at the table’ each week.  From our injured pigeon spirit animal, to drive-by donations, being flown to NYC with a day’s notice, getting nearly ousted from the park and then officially sanctioned by the city… I am looking forward to recapping each Wednesday, celebrating those who come by to support us, and catching everyone up on what a wild adventure this past 12 weeks has been!